Cadillac began building the Model 30 in 1908, the same year the company was acquired by William Crapo Durant's General Motors and given the famous slogan "Standard of the World". The Model 30 was not Cadillac's first four-cylinder model; that honor went to the 1905 Model D. With the introduction of the "Thirty". all previous models were discontinued, and the model became the company's sole offering. The Model 30 was produced from 1908 to 1914 and was an affordable, high quality and innovative automobile. Prices started at $1,400 and it was available as a roadster, touring with seating for five, and demi-tonneau. The 226-cubic-inch, L-head, four-cylinder engine produced 30 horsepower - hence the Model 30 designation.

After the introduction of the self-starter, Cadillac was awarded another Dewar Cup. Cadillac had recognized that starting a vehicle by a crank exposed the driver to risk of injury and made it difficult for women to operate the vehicle. Dayton Electric Laboratories (called Delco) was contracted to develop the electric start and drive system for the 1912 Cadillac models. This system not only made starting easier, but also served as a power source for the lights and other systems. 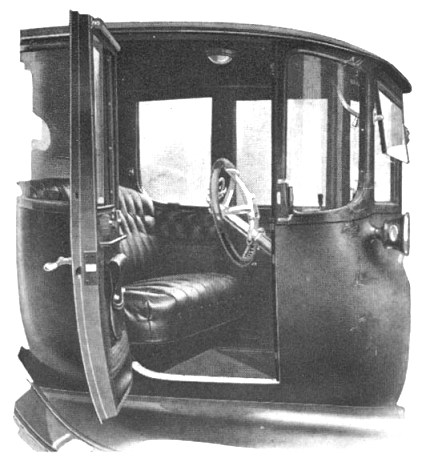 In 1913, the engine's stroke was increased by 1.25 inches, which significantly increased displacement and power, although the calculated output remained the same. The L-head engine now had a displacement of 366 cubic inches and produced 45 horsepower at 2,300 rpm. It was assisted by a three-speed manual transmission, and the brakes were served by two-wheel mechanical brakes. The suspension consisted of a leaf spring suspension.

The Model 30 was revised again in 1914, the last year of production, and received an optional electrically shiftable two-speed direct-drive axle to further enhance performance. This feature made driving quieter at high speeds and was easier on the engine. Seven different body styles were offered, and the 366-cubic-inch engine continued to produce 40-50 horsepower. They rode on 27-inch wheels with 34x4.5 tires. The large size and potent engine mimicked some of the top cars of the day. In many ways, Cadillac was a technological pioneer. 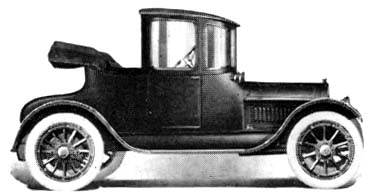 The vehicle, a 1914 Cadillac Landaulet Coupe, is one of the rarest and most interesting pre-World War I Cadillacs. Only about 50 cars of the "Thirty" model with the three-seat Landaulet Coupe body were built in 1914. Only three of them have survived. One is owned by the American automobile collector and movie comedian, Jay Leno.

The 1914 Cadillac has several features that make it unique:

The following history of the vehicle is known:

1914
The Cadillac was sold to the wealthy family of John and Mary Phillips. They lived at 600 1st Street in Jackson (Michigan). The family had 10 children and also owned a large Cadillac limousine. This was driven by John Phillips. The sporty Landaulet coupe was used by Mary. Since she was not 150 cm tall, the steering was made flatter and the gear lever was bent. 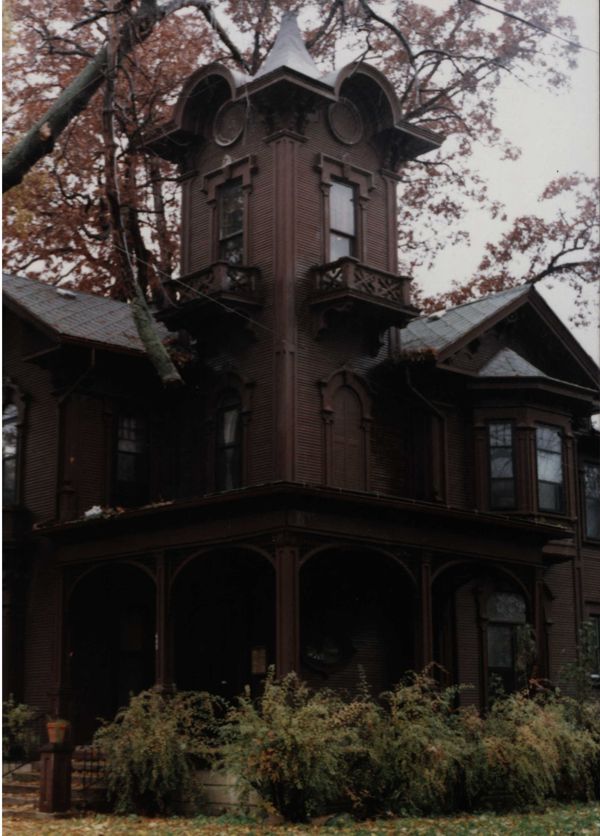 House of family Phillips in Jackson

1922
After the death of Mary Phillips, the car was passed on to her daughter Nina and her husband Ford Lake in Dowagiac (Michigan, USA).

1951
After the death of the husband Ford Lake, the car was parked in a wooden barn in Dowagiac (Michigan,USA). Poor conditions in the barn caused damage to the wooden frame.

1982
After the death of Nina Lake, the car was discovered and recovered in the barn by automobile collector and hunter, Robert Hustable (right on photo). It was placed in storage at the REO Museum in Lansing. 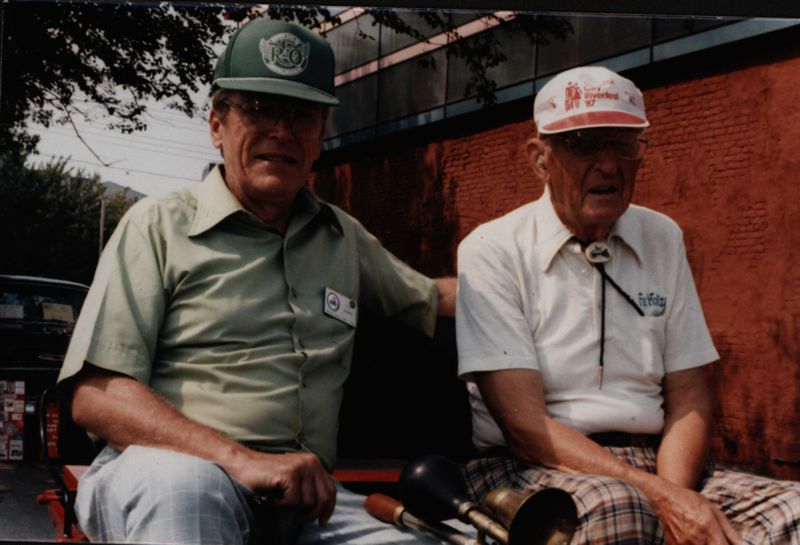 1985
Dentist, Dr. Elroy Kidle, of Saranac (Michigan, USA), like Robert Hustable, a REO collector, is a frequent visitor to the museum. He is able to purchase the Cadillac and begins a complete restoration.
The car was completely restored except for the interior panels (these are original) and the final paint. 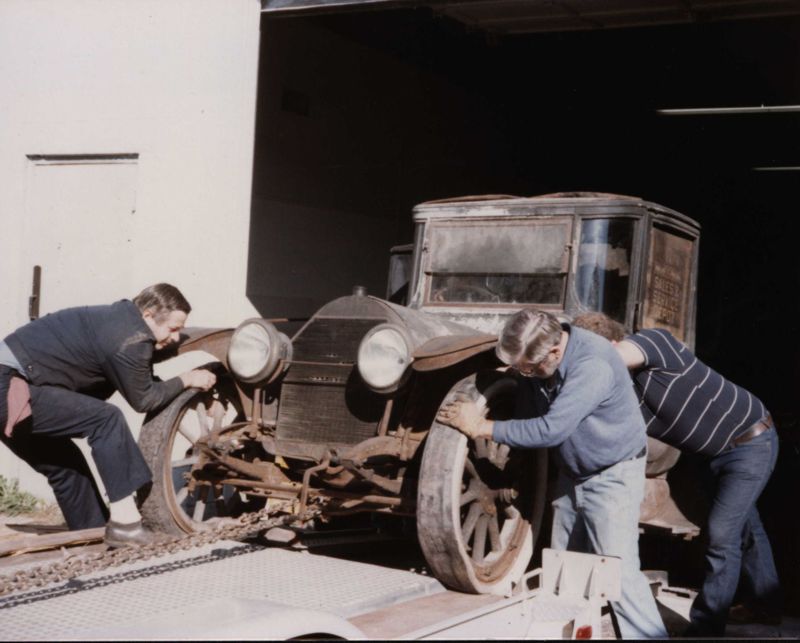 Collection at the REO Motor Museum

2012
In the summer of 2012, the now 83-year-old Kidle publishes an Internet article in which he points out that he wants to sell his classic car collection for reasons of age. He pays special attention to his Cadillac in which he had already invested more than 100,000 US$. 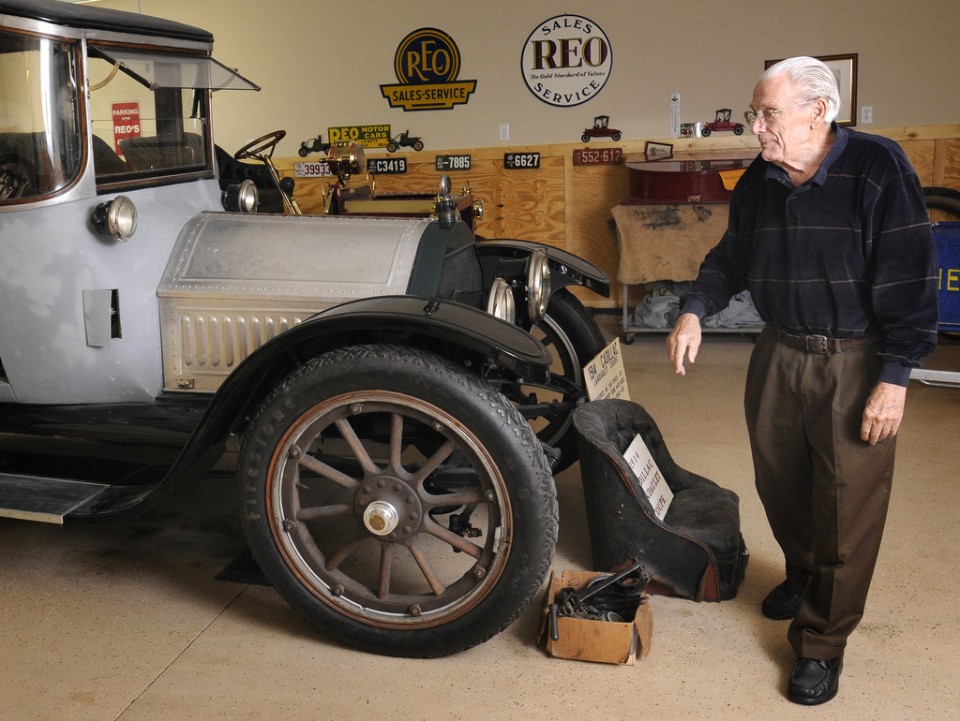 2016
I asked Mr. Kidle again if the vehicle is still for sale. Mrs. Kidle informed me that her husband had passed away months ago. However, the Cadillac was still for sale. She asked me to make possible sales discussions with Steve Sturim (Antique Auto Repair in Wyoming, USA). In September 2016 I was able to buy the rare and extensively restored car.

Today the Landaulet coupe is in my collection. Thanks to the size of over 200 cm and the elaborate tulip body, it attracts many admiring glances. The goal is to recommission the mechanics and the engine and to do the necessary remaining work (interior trim and final painting.

All work and the complete history of the vehicle are documented with countless photos.