One of the first and best-selling electric car brands was the Detroit Electric, which had its roots in the Anderson Carriage Company. The first Detroit Electric hit the streets in 1907. By the end of that year, a total of 125 had been produced, and in 1908, the company introduced an enclosed-cab vehicle, the inside-drive coupe, which boosted sales even further.

In 1911, the company became the Anderson Electric Car Company to reflect its main line of business. Production of Detroit Electric models peaked in 1916 at 1,893 units, making it the most popular electric vehicle on the road.

The Detroit Electric brand was distinguished by battery packs at the front and rear and control units under the enclosed passenger cabin. The design was tall and upright, and Detroit Electrics were the first cars with curved side windows that eliminated blind spots in city traffic. Aluminum was used for the body because of the heavy weight of the batteries.

Electric vehicles were favored by doctors, for example, because they could start immediately, which could make all the difference in a medical emergency. They were also favored by wealthy women in cities because they were easy to drive and, unlike the dirty, sometimes unreliable gasoline vehicles of the time, did not have to be started by the often difficult turning of a crank.

The popularity of electric vehicles began to wane after Charles Kettering's invention of the electric starter made internal combustion engines easier and more reliable to operate. After the war, Detroit Electric shifted its focus to the production of electric delivery vehicles, which remained popular even after the decline of the automobile business. In the 1920s, the company also continued to produce bodies for other automakers in the region.

The Great Depression proved to be the final challenge that could not be overcome, and in 1939 the last Detroit Electric was assembled.

My Detroit Electric is in good condition and an excellent candidate for restoration. It is essentially complete, and the body is in good shape, with headlights, lamps, and exterior handles intact. Most of the original interior features are also still present, including both throttle and steering wheel controls, the instrument panel, and the ornate interior lighting. Enough of the original upholstery remains to provide an easy path for a restorer or to present the car as it was found. Batteries are not currently installed, but the electric motor has been tested and found to be functional.

Given that virtually all major manufacturers are now embracing electric vehicles and alternative fuel vehicles, it is fair to say that the Detroit Electric was well ahead of its time, and this charming Model 93 provides a wonderful opportunity to celebrate one of the great pioneers of the American automotive industry.

The following information is known about the history of my vehicle:

2020
The vehicle is offered by RM Sothebys. It enters my collection afterwards through an intermediary dealer.

According to the dealer, the car was previously owned by a Kansas collector (Mark Freimiller). Mr. Freimiller had purchased the car from a collector in Nebraska. It was recalled that this man had collected 4 to 5 old electric cars.

However, exact information is not known. I would appreciate more information on the history of this vehicle. 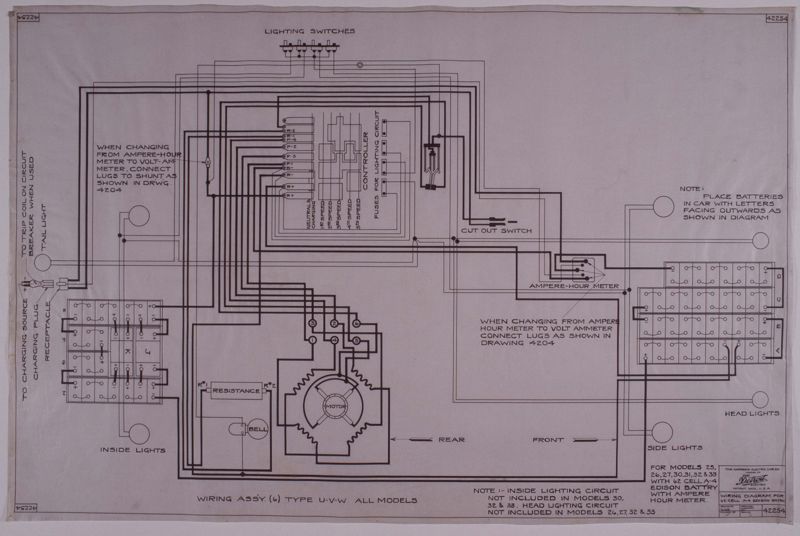 Research with the son of Detroit Electric's last general manager, Galen Handy, has resulted in me now being in possession of approximately 3000 technical drawings. These will be helpful in future restoration.